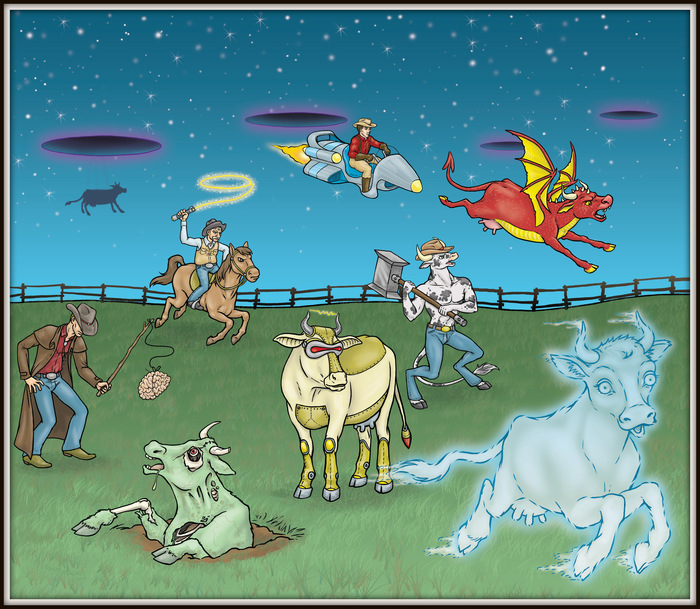 This week I got a chance to talk with Dominique and Nathanuil DeMille, designers of Monster Moos. Let’s see what both of them had to say about their game and their ongoing Kickstarter campaign.

We are Dominique and Nathanuil DeMille, the owners of Blank Wall Games Inc. Nathanuil is a mathematics instructor at the University of Arkansas and Dominique is a former retail manager turned work from home mom. We are avid gamers and love to introduce our non-board game friends to the joy of cardboard.

2) Can you describe Monster Moos in a few sentences?

Monster Moos is a casual strategic game in which players take on the role of inter-dimensional cowboys trying to wrangle herds of monstrous cows.

I love the sit-a-spell mechanic. I feel that a lot of games with variance, like Monster Moos, need some way for players to actively affect the variance in the game. Being able to give up your turn to sculpt a strategy makes us feel like our choices have more of an effect on the game than just blind luck.

4) Tell us how you came up with the theme for Monster Moos.

The theme is all due to our son, Octavian, and his perception of animals. As we describe in our Kickstarter intro video Octavian learned his animal sounds starting with Dinosaurs. It took well over a year before he would even say dinosaur, most of the time he would just call them rawrs. When he started learning other animal sounds he figured that since dinosaurs roared so did every other animal on the planet and there was no need to learn the animals name, just call it by the sound it made.

We live in Arkansas and some of the cities have grown out to encompass large estates with cattle on them or research fields from the University so it is not uncommon to see cows out in pasture land while driving around. We were driving through Fayetteville and Dominique and I were talking about another game we were working when Octavian saw some cows and got very excited and kept moo-roaring over and over. It was pretty funny and we were laughing and one of use responded that yes those were some Monster Moos out in the field. This led to a discussion about what it would be like if there were different kinds of monster cows and how you would catch them, which ultimately led to Monster Moos.

Nathanuil is partial to the Zombie cow, but thinks the Ghost cow is pretty cute and Dominique likes the Dragon cow!

6) What are some other games that if other players liked that game, that
they would like Monster Moos?

This is an interesting question. We tried to brainstorm with a lot of players about what other games we would compare Monster Moos to but the best description a player came up with was Rummy meets Go with theme. Monster Moos is not even close to as complicated or strategic as Go, that isn’t the point of the game, but it is hard to pigeon hole it. Some people have called it a set collection game, others a trick tacking game. I would say that if you like games like Get Bit, fun or light games where the players determine the complexity, then you will like Monster Moos.

7) Monster Moos is a reboot of your first Kickstarter board game project. What are some of the things you’ve learned from that you think other Kickstarter creators would benefit from?

Primarily don’t rush into it. Build up support first, try to figure out were your first 20-30% will come from and how you will dole out cool bits of information throughout the campaign. We have learned a lot and there is a lot of information out there that wasn’t when we ran our first campaign, so do your research also, but I guess that links back to the don’t rush in advice.

The second thing is promote everywhere and every way you can. We always look at the other projects our backers have backed or are backing and I am amazed at how many great projects, both successful and unsuccessful, that I had never heard about.

8) What were your design inspirations for creating Monster Moos?

Our design inspiration came from our desire to broaden the audience for hobby games. Right now it is our perception that the gateway to hobby gaming is pretty narrow. You basically go from Roll and Moves or Party Games straight into high strategy. That’s not to say that there aren’t good gateway games, just that there aren’t as many options as we would like. So when we set out to design Monster Moos it was with the goal of creating a game that would be accessible to anyone, even it wouldn’t appeal to anyone. From the outset we knew we wanted a game that was a race to win and not a brawl or a race to be last to lose. We also wanted player choices to be meaningful to the game’s outcome, and we wanted to reward active players, without penalizing distracted players.

9) What type of gaming experience do you hope to create for the players of Monster Moos?

Our goal is to have a light fun game that will be a simultaneously accessible to different groups of people, effectively a game for anyone even if it isn’t for everyone. With our experienced gamer friends it becomes a strategic push your luck sort of game because you are trying to maximize your points per trick and leverage the action cards to make big plays. For younger gamers it is a game of matching and counting trying to make the biggest play they can at any given moment and variance plays a bigger role. For casual gamer adults it falls somewhere in between. The thing we love about the game is that all three groups can play at their level at the same time and still be competitive. I want the tricky strategic player to be able to pull off a sweet line that gets him a big score and takes him from last place to first, but I also want a child to get happy and excited when he gets lucky and gets the last tool he needed to capture a big herd that had been growing turn after turn.

Monster Moos is our first game to try to take to publication, but our goal is be more than a one trick pony. We want to build a company that helps bring more people to hobby gaming and exposes more players to all of the great games out there. We love board games and feel that the shared experience they bring is vitally important when so much of our entertainment is individually consumed. It is also important to use that we make the hobby accessible to younger generations because every other form of entertainment is vying for the attention of our youth and games that parents and their kids can play together are a key component to strategy.

Thanks Dominique and Nathanuil for the interview! Make sure to check out Monster Moos on Kickstarter now.