This week I caught up with Chris Solis, designer of Terreria Tactics – an interesting battle card game. I’ve been following Chris’s development and it’s great to see the game on Kickstarter. Let’s see what Chris has for us. 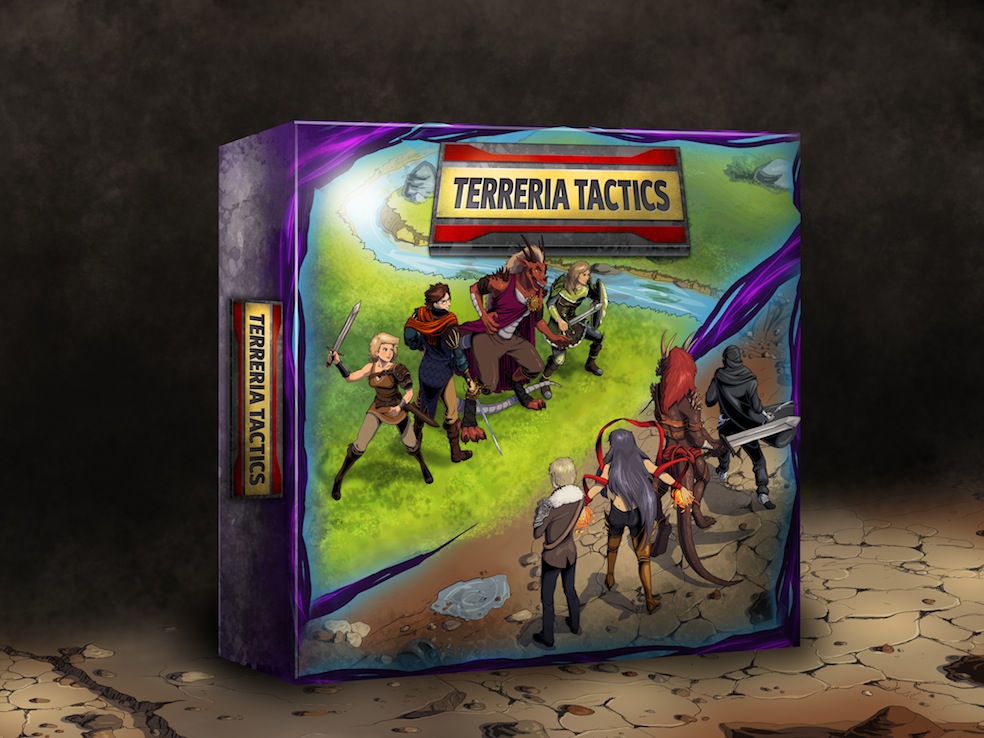 I’m Chris Solis, Founder of CGC Games, life-long gamer, and creator of Terreria Tactics. I’ve been involved in organized play for tabletop as a player since middle school and I became a event host in 2006 for tabletop and video game events. Now in 2013, I’m looking to bring Terreria Tactics to life.

2) Can you describe Terreria Tactics in a few sentences?

Terreria Tactics is a battle card game based on the traditional combat systems of console 90′s RPGs. Recruit your party of 4 characters and fight against another player’s party. The game is all-inclusive which means there is no trading or collecting. All the cards come in one box for you to jump straight into the game with up to 4 players (including yourself). 4 decks come pre-constructed in the box. The rest of the card pool can be found under the insert. 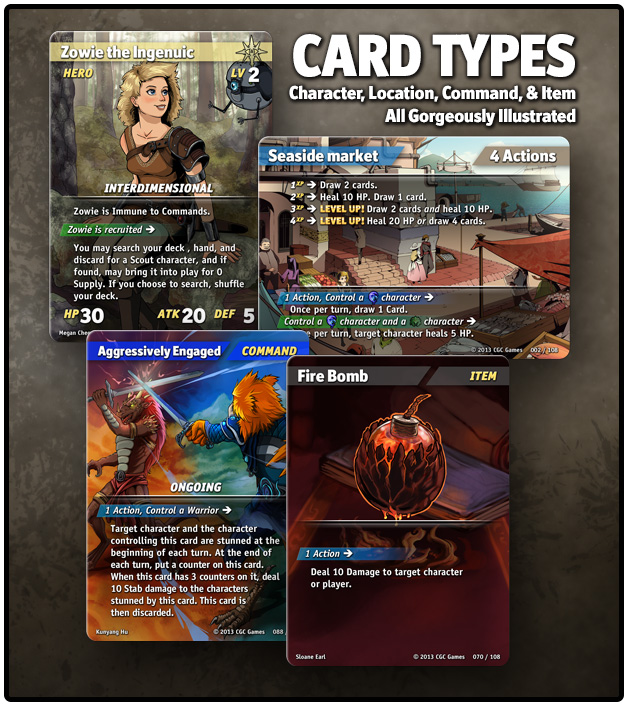 The set-up of the game. We call it ‘Starting Party Composition’.Each player sets up their starting party in secret from their 30-card deck. That’s 4 characters, 1 Location, and 4 Items/Commands attached to your characters (leaving only 21 cards in your deck). When the game starts, the cards will be revealed over time at the player’s discretion. This is really interesting because from the same deck, you can set up different starting parties to adjust to your opponent’s strategy and play style. Of course, having more starting set-ups in your deck weakness your mid- and late-game draws so that is a choice the player needs to make. When two players understand the game well, this set-up phase reflects a lot of player psychology and meta-game understanding. It’s an extremely simple mechanic with huge depth that the game has been designed around.

4) Tell us how you came up with the theme for Terreria Tactics.

Terreria Tactics is actually based on a screenplay I wrote (I have an MFA in Film). The sceenplay was inspired by the idea of a teenage village girl meeting a person from the future. What would this innocent girl think of this odd person from the future? What would the time traveler think of this simple girl or this world governed by magic? Terreria grew from that one meeting in the woods. When I started populating the world, I wanted to avoid dwarfs and elves. I’m tired of ‘em. I had this spin on dragon characters where they were bipeds, a little bigger than humans but not so much that they wouldn’t live among each other. Soon after, bird and water people started showing up on their own.

My favorite character is SK the Art Historian. What make’s SK really unique is how much you can learn about your opponent’s deck if you get his effect to go off. When SK damages a player directly, that player must show you three items from his or her deck, give you one and discard the others. So, not only do you steal a card and rob your opponent of using two others, but you gain insight into how that player has constructed his deck. SK is definitely a character for a player who likes to make predictions and deductions about their opponent’s strategy.

6) What are some other games that if other players liked that game, that they would like Terreria Tactics?

If you are a fan of other battle card games, you’re going to like Terreria Tactics. Magic: the Gathering, Yu-Gi-Oh!, Card Fight Vanguard, etc. I grew up with Magic: the Gathering and Yu-Gi-Oh! and I would love to still play but trading card games are expensive. This is why I wanted to design a card game in the fashion of a board game. Open the box and have fun! If you like video games like Pokemon, Final Fantasy, or Fire Emblem, you’re going to love that Terreria Tactics reminds you about those kinds of games and has beautiful art like those games as well.

7) Terreria Tactics is your first Kickstarter board game project. What are some of the things you’ve learned from this experience that you think other Kickstarter creaters would benefit from?

Launching a Kickstarter is not easy. We planned to launch a Kickstarter in January but we kept pushing it back and back because we simply we’re not ready. After tons of hours of research, we finally felt ready to launch. Pledges are also very hard to create. You have to pull back for a bit and ask yourself ‘ Would I pay for this?’. My #1 tip would be have an audience before your launch. We started our social media campaign in January and they really helped us get good Day-1 pledges.

8) What were your design inspirations for creating Terreria Tactics?

My number one design inspiration is actually Starcraft. What? Starcraft? But this is a card game! Hear me out: In Starcraft each unit has a role, purpose, and function at different points in the game. I took this philosophy and made sure it would be reflected in Terreria Tactics. In card games, it’s easy for a card to simply not have a function or be an inferior version of another card. I don’t want to make cards like that. I want my cards to be as functional as units in Starcraft. There are 108 cards in TT. Every single one of them has a purpose and lends itself to optimize certain strategies.

9) What type of gaming experience do you hope to create for the players of Terreria Tactics?

Two things: I want people to be able to play this game casually. I also want Terreria Tactics to offer a deeper gaming experience for those who are competitive or insightful. You can have a lot of fun picking up the preconstructed decks and duking it out. You can also have a great time studying every card to create your customized deck. The box set comes with three copies of all 108 cards (324 total), so that the competitive player can craft their perfect deck against other competitive players who own the game.

It is my dream to make a game people love to play and I will do everything in my power to make that dream a reality. I want to say thank you to my early playtesters and pledgers who are really putting Terreria Tactics on track for success. I’m putting everything I have into Terreria Tactics (money, time, favors). Thanks for the interview.

Thanks for the interview Chris! Make sure to check out Terreria Tactics on Kickstarter now.

2 thoughts on “Terreria Tactics – An Interview with Chris Solis”